International Missing Children’s Day is on Saturday May 25th 2013 and I wanted to give it some air time. For 2 reasons firstly I think too many children are going missing, the statistics speak for themselves but also as a mother I think it is vital that we are protective of our children.

It is also a subject very close to my heart and I felt compelled to dedicate some time to the importance of today and to support those who are having to cope with a missing person whether it’s a child or adult. It is an experience unimaginable a mixture of grief, loss, anger and frustration and the more people that are made aware of the plight of “Missing Persons and Children” the more we can do to help, be vigilant and be more aware.

It almost happened to us and it could happen to you.

The gift of raising children comes with a great deal of responsibility and care. We can’t protect them all the time, we need to be aware of what is going on and as parents we are always learning.

Parenting is no mean feat, we spend much of our time in a state of constant worry, did they get to school safely, are they ok, who are their friends, are they happy, am I a good parent, what can I do to be an even better parent, what if my son/daughter runs away, what would I/we do if our child was abducted.

Parenting does not come with a manual what method employed in the upbringing of a child by one set of parents may not be right for another and their children.

As parents it is our duty to prepare them for life as best as we can. Most of our guidance will be based on our own upbringing as children.

Children deserve and need our love, affection, care, support and courage. We can teach them right from wrong and pray that when confronted with something or someone that doesn’t feel or look right that they have the courage and strength to act instinctively.

Many children go missing each year either forcefully and unintentionally (abduction) or decided and intentional.

What does ‘Missing’ mean?

From an abducted child to adults unless they are within the criminal justice system or detained under various sections of the mental health act have a legal right to go missing. 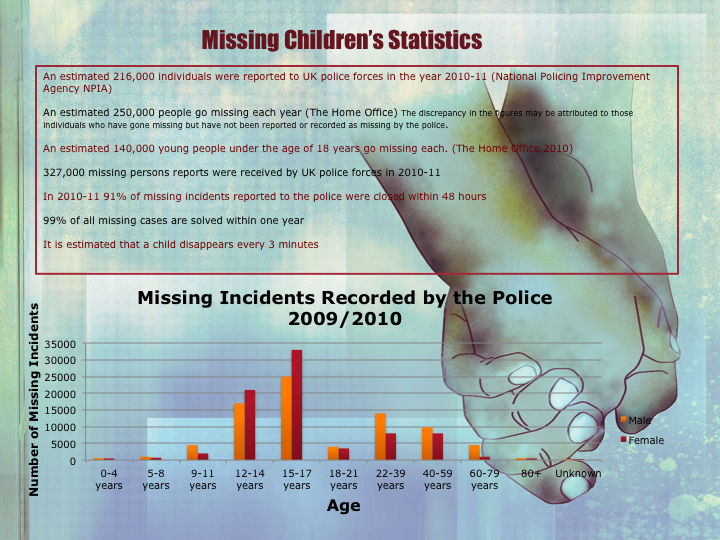 This makes defining ‘missing’ a complex issue because people go missing for many different reasons.

There isn’t a day that goes by where we are not made aware of a missing child most recently the three american girls Amanda Berry, Georgina DeJesus and Michelle Knight were held in captivity for almost a decade.

Madeleine McCann abducted in Portugal in May 2007 and still missing.

Missingkids.co.uk has a list of children that are missing or have been reported missing the list is endless.

Approximately tw0-thirds of missing cases relate to children and young people this is equivalent to 140,000 people under the age of 18 that go missing each year (Home Office 2010)

Why do children go missing?

Problems at home, conflicts with parents or carers, physical or sexual abuse, missing by force where children are abducted by a stranger and parent abduction.

David Finkelhor, director of crimes against children research center at the University of New Hampshire USA says there are 5 myths about missing children:-

1. Most missing children have been abducted by strangers

Children taken by strangers or acquaintances represent one-hundreth of 1{1d74e91790c4d065853aa1e61f19fbe549b48cdbdef5356588c1984bdc5a1a2f} of all missing children an estimated 115 in a year. It is more common for children to run away, to have got lost or injured, have been taken by a family member usually in a custody dispute or aren’t where they are suppose to be because of lack of communication.

The high profile cases of the Cleveland girls in the USA and in the UK, Maddy McCann gives the perception to the public that we are facing an unprecedented epidemic of abductions and yet the opposite is true there are fewer missing children one of the main reasons for this Finkelhor explains is because of the prevalence of mobile phones among children that allows them to call for help in situations where they may well be threatened. Parents are able to call them when they aren’t where they should be.

3. The internet has made kidnapping easier

The rise of social media platforms and the ease with which children can view the internet has undoubtedly raised concerns because children can meet nasty people on line they are naive and vulnerable to internet predators. The idea that the internet amplifies the problem is open to conjecture.

Finkelhor says ‘that the web has changed the way young people take risks: they do it more often at home. Instead of going to an unchaperoned house or to a party without telling their parents the exact location, young people are likely to experiment and socialise on line.

Although they can meet bad people on line with bad intentions, the physical distance means that more time elapses between an encounter and a crime. Electronic interactions leave trails which are more likely to be foiled either by parents or the police.

As children we always recall one thing that our parents drilled into us almost from the moment we could walk and talk and that was don’t talk to strangers and don’t take anything from strangers. Finkelhor takes issue with this because he rightly says that for most children everyone is a ‘stranger’ to begin with,  it depends on the context of the meeting.

Children come to more harm from people they know than by people they don’t. As parents it would be better to try and educate our children to recognise the warning signs of people behaving badly for example being touched inappropriately, being overly personal, trying to entice them to be on their own with them, acting drunk or wielding weapons.

As parents we need to show children how to be assertive and just say NO, how to summon help when feeling threatened and how to extricate themselves from a situation they don’t feel comfortable about.

5. The main goal should be to reunite children with their families

Police officers and the relevant authorities are tasked with finding missing persons, reuniting them with their families and charging the perpetrators. But in many instances children that have gone missing because of free will are reunited with families who systematically abuse them physically and mentally, they suffer from neglect or there is on going conflict with siblings or parents.

Missing Children in Europe (MCE) was established in 2001 by the european parliament.

It is a europe wide umbrella organisation representing 28 voluntary members organisations from 19 member states which work against child disappearance and sexual exploitation.

With the relaxation of border controls across europe and the freedom of movement between countries, the adoption of a europe wide approach to the problem of missing and sexually exploited children had to be implemented.

MCE exists to foster co-operation across borders to prevent children going missing, being abducted or sexually exploited. It supports the extension of members’ activities and helps members to implement european legislation.

One of its most vital projects was the implementation of a pan european telephone number 116 000 as a hotline for missing children. Launched on International Missing Children’s Day 2009 the hotline works across 22 european countries providing support for missing children and their families by linking them to a national dedicated organisation.

Enables information to be broadcast to the public about children who have gone missing in unusual or worrying circumstances and child abductions by means of electronic media, advertising, emails and SMS.

The EU’s aim is to establish the alert mechanism across all member states it is operational in 11 member countries including the UK.

The CRA is a tool based on the ‘AMBER’ (america’s broadcast emergency response) alert system which originated in the USA and has been operational since 1997. The system was set up after the abduction, rape and murder of Amber Hagerman in 1996.

The system is used by UK senior investigation officers for use in abduction or kidnap cases involving a child. Its main objective is to locate the child and bring them to safety by using media to publish details regarding a child’s disappearance.

The public are asked to call: 0300 2000 333 if they have any information in relation to a missing child this number is only available when a CRA is activated.

In the UK the sussex police were the first to introduce a CRA system in November 2002.  By 2005, every force in England and Wales had their own CRA in place. Relaunched on International Missing Children’s Day 2010 this marked a nationally co-ordinated system which enables police forces in england and wales to collaborate more effectively should a CRA be launched.

CEOP manage the CRA by providing advice and support and working in collaboration with the UK Missing Person Bureau to help investigate and publicise cases where a child has been abducted.

CEOP works with police forces to ensure best practice across the UK’s police forces and european countries and to make sure the CRA system is managed effectively.

We must also remember the parents who live in constant despair and anguish not knowing where their child or loved one is alive or dead, well or sick.

The impact on the family of an abduction or a missing person can be nothing less than catastrophic.

Imagine waking up every morning in a state of utmost despair, anger, frustration, sick to the core, the fear of not knowing will I ever see my baby again.

No parent should ever have to experience that.

PLEASE SPARE A THOUGHT TODAY FOR ALL THE MISSING CHILDREN AND PEOPLE WHO HAVE BEEN TAKEN AGAINST THEIR OWN WILL OR WHO HAVE CHOSEN TO GO MISSING.

SHARE THIS AND LET’S GET THE MESSAGE OUT THERE.

INTERNATIONAL MISSING PERSONS DAY ISN’T JUST ONE DAY, FOR MANY IT CAN SEEM LIKE A LIFETIME.