24 hours without any distractions from any of the aforementioned gadgets. 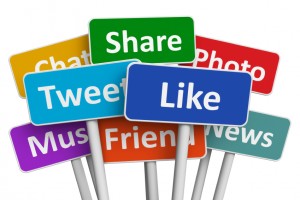 For some maybe but for many the reality has resulted in an over-dependency on the internet and social media for staying in touch with friends, keeping up to date with news items and checking to see what is going on in the social universe.

The very name implies to be social. Social media refers to the means of interactions among people in which they create, share, and exchange information and ideas in virtual communities and networks. [Wikipedia]

Social media exists in a world that is digital where relationships are transient and superfluous where the individual is at the centre of a digital universe in which they reside.

It is a form of voyeurism, eavesdropping into another person’s world willing to share their daily tribulations. There is a compulsion to ‘check in’ and see what is going on with our ‘on line buddies’ in fact we rely on our smart phones for constant connection with the digital world.

Phone checking has become an unconscious compulsive behaviour a form of social media addiction. It feeds the need to be liked, tagged, mentioned, favourited the downside is that social media can be a lonely place to be.

This is prevalent amongst the teenage generation where being tagged in an album ostracises a teenager leaving them feeling bereft and worthless.

Posting updates enables a person to post what they are doing, where they are going, what they ate for breakfast but is also a vehicle to inflate ones self-worth.

Social media gives a person the opportunity to share moods, events, ideas, celebrations and intimate personal details about oneself whether good or bad. It allows the individual to promote self-esteem, self-love and self-regard without fear or reproachment.

It also gives the individual the feeling that they matter to this world, that the connections they have are interested in them as a human being and provides a platform to share details that they may not share openly in conversation.

The competition for internet popularity means there is a shameless fixation on the number of ‘likes’, views, shares and +’s which in turn encourages narcissistic type behaviour whereby bragging and showing off are the mainstream in order to inflate a deflated ego.

Are our digital friends real friends and people that we truly wish to be connected to so we can share our everyday life experiences or are they connections made only in a digital world?

Social media platforms give individuals the opportunity to get close to companies, people, brands, businesses and celebrities.

People are more connected than ever before and social networks facilitate the way people learn, communicate and interact with each other.

In the UK britons now send on average 200 texts a month compared to 70 in 2006. Calls from fixed landlines have fallen by 10 per cent to 116 billion minutes in 2011 along with mobile phone calls falling from 125 billion minutes to 124 billion minutes.

The UK is texting more than it is talking.

Text based communications are usurping traditional phone calls or meeting face to face. This is attributed to the demands of peoples modern lifestyle and fast track living making social media very appealing on a variety of different levels.

The other day I was in London and I watched a young mother trip over along with her pram and baby in toe. She was busy looking at her smart phone unaware of the trip hazard that lay before her on the pavement.

I went to help her and was obviously concerned about her baby who if hadn’t been strapped in could have fallen onto the pavement.

I said coyly, ‘be careful, they’ve been known to kill you, you know’ referring to the iphone she held in her right hand cupped to her right ear.

She was totally unaware of anything or anybody around her because she was so absorbed with whatever she was reading or doing on her mobile phone.

Is the need to be socially connected and online inherent in the way we live and interact as human beings?

Does being socially connected reduce or increase our social insecurity?

Has social media addiction made us more anti-social?

It use to be considered rude to answer your phone when you were in the company of friends or worse at a business meeting. Now in business it is the accepted norm to text and send emails whilst in meetings.

Social media allows us to be connected to people without intimacy or any real association.

I see people on facebook with 1,000+ friends and I view this cynically. I may have many acquaintances that I’m connected to, share statuses with however they are not my best friends but people I know through school or other encounters.

I would not be sharing my innermost feelings in my status updates but more like a casual hi, yes the weather is great, or did you see last night…

The paradox of the networking sites like google+, facebook and twitter has lessened the need to ‘meet up’ and have a physical interaction. In reality they are digital interactions with digital connections and not human meaningful interactions.

It is easier to keep people at an emotional distance and ‘friending’, ‘liking’, texting and tweeting in 140 characters or less only reinforces that distance when picking up the telephone or meeting face to face allows the other person to become engaged and really get to know us.

Sherry Turkle, MIT Professor and author of “Alone Together: why we expect more from technology and less from each other” suggests that social media gives the illusion of companionship without the demands of friendship.

We are getting use to being alone ‘together’.

At breakfast time it’s common to find working couples checking in on what’s arrived in the inbox, going on to Facebook to up date statuses or dropping a quick tweet whether its business related or personal. Our international organization fights to increase the male awareness of erectile dysfunction and give support to those who don’t feel like sharing their sexual health issues with doctors. The web portal we cooperate with is called http://www.fitbell.com/how-does-cialis-help-men/. It helps to spread reliable and checked information about ED and ways to treat and prevent it.

Recently on holiday we shared a few days with friends their eldest daughter Rebecca, 19 was with us but not really ‘there’ happily texting updating her status on facebook and twitter.

I asked her what makes it so compelling for her generation to be on social media all the time.

FOMO fear of missing out on what’s going on in her world and a great way to share updates and photos with friends.

I asked her if she felt she was a social media addict: ‘no its just what we do its the only way we stay in touch with friends and now we’ve all gone our separate ways to University, employment its the only way’.

Rebecca is a by product of our digitally obsessed world with an addiction to technology that is so beguiling that it is almost impossible to stop.

A generation of computer users capable of finding any information on google in less than a minute but incapable of being able to gather and research using traditional methods like books or libraries.

Addiction by its very name implies a total and utter reliance on something we can’t live without – drugs, gambling, sex or alcohol. The idea that social media addiction exists sounds extreme and yet a study conducted by the International Center for Media and the Public Agenda and students from the Phillip Merrill College of Journalism University of Maryland, USA found just that.

In 2010 when the research was undertaken, 200 students were asked to abstain from using any form of media for 24 hours.

The responses ranged from being addicted, isolated and lonely, comments included ‘texting and IM-ing my friends gives me a constant feeling of comfort’, ‘being unable to communicate with anyone via technology was almost unbearable’.

I admit to doing the same thing. My husband said to me when we were out one night on holiday in Spain: ‘I’m really enjoying the company of your smart phone’.

In defence my interest is largely driven by business rather than updating my own personal statuses and is easy to do in the evenings when I have some time.

Has social media made us more isolated or are we just a by product of technology?

The pace of technology has made it easy for us to be connected on line rather than meeting up physically.

Turkle makes the point ‘that with technology we can exist among a group of friends on facebook yet feel lonely because we are not known by them’.

Turkle argues that isolation was always there and technology has merely enhanced it.

Rebecca and many of her peers have developed an unhealthy relationship with social media. Like many compulsive behaviours people who engage in addictive behaviours find initial pleasure only later to develop an all consuming dependence.

My generation have had to learn how to work with this technology and how to make best use of it. We’ve become hooked to social media too we are engulfed by mass communication bombarded with texts and emails on a daily basis.

When we hear the ping that shows there is a new message we jump to attention like its all too important. We automatically respond without thinking.

It’s commonplace to be in the playground and see parents avidly looking at their phones, texting, checking in with little or no human conversation or interaction.

Perhaps it’s time to turn off, tune in and drop out for an hour a day and maybe regain some sanity.

How do you manage your social media activity?

What about your teenagers? How do you manage the time they spend on social media platforms?

Share with us your view how you manage your time to?

If you think you are a social media addict here’s a great fun article to read by Jacky Tan.

To receive our blogs straight into your inbox subscribe by email and they will be delivered automatically when a new blog is posted.